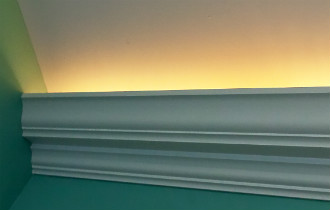 Cove lighting is indirect lighting that has aesthetic value. It is a mode of lighting that can give a certain character to a given space as it is normally used to achieve dramatic effect, or create a specific mood or ambiance in a particular area or setting. This style of lighting is applied in homes, offices, exhibition venues, and most fine dining restaurants and other establishments more for its beautiful visual effect than its utility. In restos and food joints, cove lighting can create a romantic ambiance, just perfect for dating couples and individuals wishing to dine in a tranquil and serene setting.

Cove lighting makes use of indirect illumination so the resulting light is subdued, soft, and relaxing to the senses. The lights are usually installed in ledges, ceiling runways, recesses, nooks and crevices, floor baseboards, and even on top of cabinets, under beds, tables, consoles, and even on side walls, half enclosing these lights to control the focus of illumination and also the clutter of electrical circuitry. Majority of cove lighting has the illumination focused upwards to the ceiling so that the reflection from the ceiling can illuminate the ground area directly opposite it, but modern day interior designs has evolved into more daring approaches: cove lighting can also be installed under a bed, its illumination to likewise serve the purpose of a night lamp; or under an open, hanging lavatory or sink in the bathroom or kitchen. Even furniture like display/curio cabinets install cove lighting inside to give emphasis to the displayed items.

Modern Asian architecture, with its Zen theme of minimalism, makes use of cove lighting extensively for its soothing and relaxing effect, just perfect for contemplation and meditation. But visually appealing it may be, cove lighting has its limitations: for one, it is not suited for multi-tasking: the lights are not bright enough for reading, writing, needlework and other jobs requiring detailing, but perfect enough for eating, exercising and other duties and household chores.

Cove lighting is also more expensive than the traditional ceiling type, as the structure architectural design should add ledges, recesses and valences to be able to accommodate and hide the circuitry, plus you will need more lights for illumination since the lights are coved, the illumination is restricted. There is also the inconvenience of changing busted bulbs, since they are not readily exposed like the traditional bulbs. Add to this is also the problem of electrical safety, since cove lighting does not allow heat to escape freely. Another problem is the size of lights used; the lights should be small enough to be able to crawl in small spaces and tight corners.

The most convenient kind of light to use in ledges are the rope lights, for their size is small enough to crawl through limited areas, and offers greatest flexibility in turning corners. Further, these are led lights, and therefore use less power consumption than the traditional incandescent bulbs. They have also been tested to last the longest, even the cheap rope lights in the market today are said to last longer by more than ten times the usual life span of incandescent bulbs.

Aside from the traditional use of cove lighting to set a certain mood, it can also be used around the house to act as accents or background against a certain piece of artwork or painting. An artwork can be lined all around the sides by rope lights, giving it a dazzling, dramatic effect. In a case like this, you will need a special cove around the painting to be able to achieve this effect. You can also wind or coil the entire length of a cylinder with rope lights and place the cylinder in a bigger container, and illuminate it, position the container in a corner and voila! You have instant cove lighting with no added construction costs. The possibilities are endless, and you are limited only by your imagination.