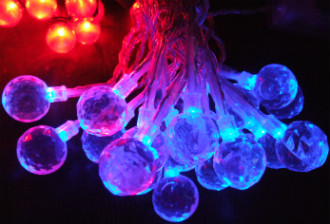 Very often, Christmas lights are replaced each year or every two years. LED Christmas lights last ten years or even longer, and this will help you save money over time as you’ll only have to buy lights once rather than several times. LED lights, although they were expensive at first, have now decreased in price, so they don’t cost too much for the average householder to afford. They last as long as 100,000 hours more than twice as long as traditional Christmas lights.

Saving energy and money are the two main advantages of LED light bulbs. They use less than one-fifth of the energy and cost you less than one-eighth of the price of running ordinary lights. They’re also available now in a variety of different colors, so you can add that Christmas atmosphere to your house at the same time you’re saving money and energy! Every single year, hundreds of people are making the decision to convert to LED lights for their Christmas tree rather than buying another set of traditional lights. With everything so expensive during the Christmas period, you’ll finally find something that doesn’t cost a fortune!